Relief of flood victims in Sudan and Mauritania 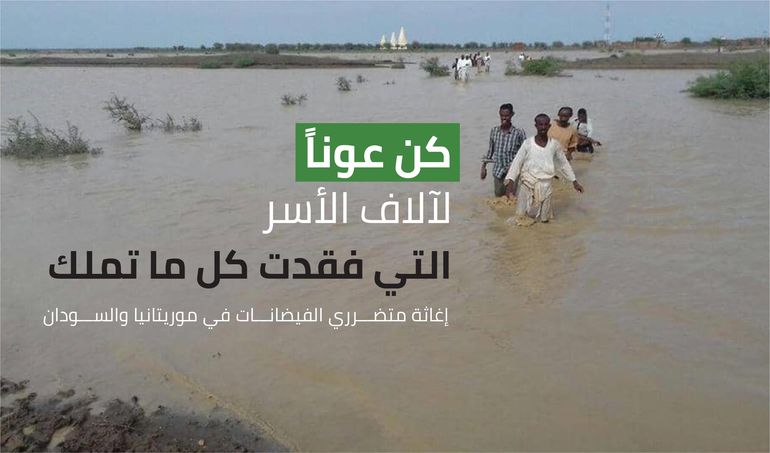 Floods and rains in Mauritania

Thousands of people in the town of Silibapi and several villages in the south-east of the Republic of Mauritania have been subjected to tragic conditions after being exposed to heavy rains that lasted for several consecutive days, exceeding the 200 mm barrier in Silibabe, and approaching 300 mm in some other areas, causing heavy human and material losses, represented by the collapse of houses and the displacement of hundreds of families. She took refuge in schools after being surrounded by water and forced by torrential rains to find a safe place away from the dilapidated buildings, often built of mud.

Thousands of displaced people are tragically homeless and in dire need of shelter and food.

It was necessary to redouble our efforts and to strive as quickly as possible to provide the necessary and essential aid to overcome the ordeal without further loss of life.

Fourteen states in Sudan have been severely damaged by floods and floods that have swept through the past period, displacing thousands of people, leaving cities completely destroyed.

The losses were estimated according to the official authorities in Sudan
A total of 40,000 houses collapsed and dozens of schools were damaged. Floods also flooded crops and killed their livestock.

The total number of affected families reached more than 65 thousand families who no longer have a living and lost food and health security.

Through this campaign, we seek to provide them with urgent support to achieve the highest possible humanitarian response to improve their situation


Contents of relief package:
Food (flour, sugar, oil, cereals) is enough for a family of 5 for one month + tarpaulin for shelter